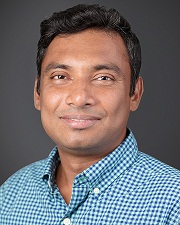 Joined the Institute in 2018

Staﬀ Scientist at Moﬃtt Cancer Center for Dr. Robert A. Gatenby, Nov 2012-2018
Project:  We analyze the physics behind autocatalytic reactions that probably led to the formation of simple early life.  The goal is to elucidate the evolutionary pressures that operated on self-replicating heteropolymers and utilize them to understand the structure and function of DNA. Broken symmetries, which underlie structure formation during early universe and explain fascinating observations such as superconductivity, also seem to explain multiple disparate fundamental observations about the structure and function of nucleotides in DNA.

Research Assistant for Dr. Jong E. Han, SUNY Buﬀalo, 2009 - 2012
Project:  A longstanding unexplained experimental observation in the dilute magnetic semiconductor Ga(Mn)As has been its uniaxial magnetic anisotropy. It is not expected from simple symmetry considerations, since the crystal is cubic. We built a model which showed that there is symmetry breaking near Mn impurities in the crystal, resulting in local Jahn-Teller distortions. With the inclusion of growth strain, these distortions explain the observed anisotropies and transitions between diﬀerent magnetization directions as hole density is varied.

Teaching assistant in the department of physics, SUNY Buﬀalo, 2008 - 2009
Handled lab and recitation sessions to help undergraduate students understand the concepts in Electricity and Magnetism introduced in the classroom.  This is done through demonstration of relevant experiments and personal guidance, and through problem-solving sessions.

Research Assistant for Dr.  Jong E. Han, SUNY Buﬀalo, 2007 - 2008
Project:  We theoretically studied the interaction between two magnetic ions placed near the surface of a semi-inﬁnite jellium using perturbation theory (up to fourth order).  We found RKKY oscillations in both charge and spin density and interference due to the presence of the semi-inﬁnite surface.

Research Assistant for Dr.  Jong E. Han, SUNY Buﬀalo, 2004 - 2007
Project: We numerically explored the eﬀect of macroscopic geometric frustration in a symmetric soft-hard magnetic system in the presence of exchange, dipole and Zeeman interactions. We performed micromagnetic simulations and showed that the sytem behaves qualitatively diﬀerently in diﬀerent regimes parametrized by the magnitude of the external Zeeman ﬁeld, and has multiple degenerate energy minima, associated with the underlying structural symmetry. A rotating Zeeman ﬁeld facilitates transitions between these degenerate minima within a given regime. We propose that this system can be used as a ternary logic device.

Teaching assistant in the department of physics, SUNY Buﬀalo, 2003 - 2004
Handled lab and recitation sessions for Mechanics, and Electricity and Magnetism courses. The work included individual student contact through oﬃce hours, and proctoring and grading.

My current interest lay broadly in identifying the physical principles that underlie biological organization.  My focus over the last few years has been on elucidating the evolutionary pressures on primordial self-replicating systems and utilizing them to understand the physical and functional organization of the modern genetic material, DNA. I and my collaborators explain multiple fundamental properties of DNA through such an approach,  as demonstrated in our publications.

Understanding the implications of the presence or absence of structural and functional symmetries has been central to both the above and my other past projects. Identi?cation of broken symmetries, which has been successful in helping us understand the abiotic, physical world, also seem to provide insights into the biotic world. I would like to pursue this symmetry-based analysis of biological phenomena further, and would actively look out for more avenues where such analyses might be fruitful.

I am currently involved in understanding the implications of the presence of asymmetric cooperativity (please refer to our papers for definition) on the structure and function of DNA and RNA. This investigation has spawned a number of research directions, which I intend to pursue, one-by-one, with my future students and collaborators.

Students interested to pursue projects related to the above-mentioned area can approach me by dropping an email or calling me. I am looking for students who are eager and enthusiastic about research in theoretical biology.

Gold Medalist in Master of Technology, University of Hyderabad, 2002

Ranked within top 93.2 percentile in the Graduate Aptitude Test in Engineering (Physics)

Stood first and second in qualifying examinations I and II resp. at University at Buffalo